Shuffling and the 53rd Card 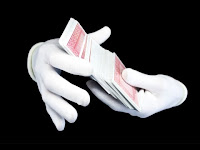 "Now the tax collectors and sinners were all drawing near to hear him. And the Pharisees and the scribes grumbled, saying, 'This man receives sinners and eats with them.' So he told them this parable: 'What man of you, having a hundred sheep, if he has lost one of them, does not leave the ninety-nine in the open country, and go after the one that is lost, until he finds it? And when he has found it, he lays it on his shoulders, rejoicing. And when he comes home, he calls together his friends and his neighbors, saying to them, ‘Rejoice with me, for I have found my sheep that was lost.’ Just so, I tell you, there will be more joy in heaven over one sinner who repents than over ninety-nine righteous persons who need no repentance.'" - Luke 15:1-6 (ESV)

A standard deck of American playing cards consists of 52 cards divided into 4 suits.  The suits contain cards numbered 2 through 10 as well as 3 face cards (Jack, Queen, King) and the Ace for a total of 13 cards in each suit.  The suits are indicated by symbols called pips.  These pips are clubs ♣, diamonds ♦, spades ♠, and hearts ♥.  When a deck of playing cards is opened the cards will be in what is commonly called "new deck order" meaning that all of the cards will be organized by their suits and will be placed in order of value.  Because of this, a new deck must be thoroughly shuffled in order to be used in a game of cards.

Accomplishing this is a surprisingly controversial task.  For example, Persi Diaconis, Professor of Statistics and Mathematics at Stanford University and a former professional magician, has said that one need only shuffle a standard deck of cards in new deck order 7 times in order to accomplish an adequate and complete mixing.  In contrast to this opinion, we find the words of Harvard University Mathematician Brad Mann in an article for Dartmouth College's Chance Project insists that the perfect shuffle looks like this:

What this means in terms of manual dexterity and manipulation of the cards is beyond my ability to understand.  Suffice it to say that Mann and Diaconis are not in agreement.  But the area of their disagreement is of no consequence in light of their areas of agreement:

1. We must begin with a deck of 52 standard playing cards in new deck order.
2. The deck must be shuffled in order to be used in a game.

Now, should we want to give both Mann and Diaconis a variable which would completely upend their hypothesis and set to one side as worthless all of their time and energy each devoted to their research on the topic, all we would have to do is change one small detail: let us introduce a 53rd card.  Suddenly these two brilliant men's thought processes freeze in place as their individual trains of thought grind to a screeching halt.  The presence of the 53rd card creates a problem that can be most uncomfortable.

Whether we are talking about mathematicians, philosophers, physicians or just "everyday people," variables arise that are often quite difficult to handle.  This might be because they are beyond what we presently understand, violate some preconceived idea and ideal or are just inconvenient to us at the time.  Regardless, they are problematic and, in many cases, are set to the side and ignored.

Consider the work of the modern Christian Church and our fascination with shuffling cards in the deck.  A lot of attention is focused, money spent and time invested in evangelizing within the deck.  That is to say, diamonds attempt to convert spades into diamonds while clubs spend time convincing hearts to change suits.  Now, is that to say that there is anything wrong with shuffling the deck?  No.  The fact of the matter is, not everyone who claims to be a Christian is one.  Not everyone who attends a Church is saved.  Not every denomination, with their multitude of conflicting doctrines and ideologies, is correct in their application of Scripture.  Many are the preachers who hold a Bible in one hand, a microphone in the other and present the Word of God with flawless delivery and total fallacy both at the same time.

But what happens when we present a 53rd card into the deck of "Churchianity?"

Once upon a time, most Americans attended religious services with some degree of regularity, had a functional knowledge of the Bible or Biblical morality and held to the practice of prayer with some frequency.  That is no longer the case today.  In present-day America, the fastest growing religious group is "NONE."  They are the burgeoning demographic and, if the present pace continues, will be an overwhelming majority.  And do not think that this is simply an "American condition."  No!  All around the world "NONE" is beginning to lead the spiritual charge.

A problem is that Christians look at these individuals, the "NONE" category, as the 53rd card.  It is far more comfortable to sit down and talk with someone who has some degree of Biblical knowledge and who, in some way, desires to have a relationship with their Creator.  But what do you do with the individual who is moral yet sees no need for Christ?  How do you approach the person who appreciates the art and beauty of religious things but sees them as archaic symbols inapplicable to the needs of the present age?  Quite frankly, it begins to blow fuses in our brains.  We cannot identify with the 53rd card, it creates a problem in our present system, upends the way we've always done things and causes internal conflicts that are far easier to simply ignore.  It short circuits our collective Christian computer and part of the reason why is because of how we have programed ourselves.

Consider this: as a Christian, are you uncomfortable around the same types of people Jesus Christ spent His time around and into which He invested His ministry?  Do the poor, hurting, addicted, troubled and downtrodden present a problem to you that you are far more comfortable ignoring than embracing?  Are the "NONE" people beyond your scope of evangelism?  And could it be that this is all because we, as Christians, have isolated ourselves from the world rather than insolating ourselves against the influence of it?  I say that is a distinct possibility.

There is nothing wrong with shuffling the deck but do not be forgetful of the overwhelming crisis facing the Church in this hour.  "NONE" is winning the battle for men's souls while we sit by and watch.  And if we do not reform our endeavors in sharing the Gospel in a practical, applicable and tangible form, we might find ourselves being shuffled out of the deck completely.

Christianity is shrinking in America.  Meanwhile, the greatest opportunity for real spiritual revival in this country exists and it is presented here as the 53rd card.  But reaching this group is not for the faint of heart.  It will require Christians who are not only earnestly committed to their faith but entirely dedicated to the ministry of reconciliation, motivated exclusively by the love of Christ and determined to intercede and supplicate before God day and night until the blindness that has fallen upon this generation is lifted one pair of eyes at a time.  It will require someone who is willing to become comfortable with walking in uncomfortable places, familiar with the manners and ways of people unlike themselves and embracing of those who are otherwise not embraceable.

Jesus loved the righteous but he fellowshipped the lost.  So, go ahead.  It's your turn to deal the cards.