The Old Covenant:Powerless and Bankrupt 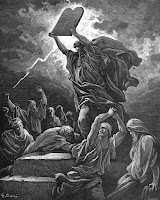 "However, in the past, when you did not know God, you were slaves to things that are not really gods at all. But now that you know God, or rather have been known by God, how can you turn back again to those powerless and bankrupt basic principles? Why do you want to become their slaves all over again? You are observing days, months, seasons, and years. I am afraid for you! I don’t want my work for you to have been wasted!"  - Galatians 4:8-11 (ISV)

To begin with, it is recommended that you read an article entitled, "Your Prayer Shawl Scares Me" before continuing.

The book of Galatians presents major obstacles to several erroneous, and sometimes generally accepted, doctrines of modern Christianity.  Not the least of these is the Apostle Paul's thorough and absolute purging of the trappings of the Mosaic Law from the New Covenant.  In the early Church there existed, as it does today, a faction which desired to hold onto Moses with one hand and Christ with the other.  The impossibility of this is made clear when we consider how diametrically opposed God's methodologies are in each system.

The Old Covenant was a series of 613 laws given by God to Moses for those who were bound by the token of the Old Covenant (circumcision) and their families.  The dietary restrictions of the Old Covenant cannot be lifted out and away from the sacrificial system anymore than the demands for keeping feast days and Sabbaths can be separated from the law of segregation of women during their time of monthly impurity.  Endeavoring to keep even part of the Law is to bind yourself to the Law in entirety (Galatians 3:10).  It simply is not possible, according to Scripture, to keep a single part of the Law. Though many continue to attempt to pick and choose those parts of the Old Covenant they desire to keep along with an attempted devotion to Christ, the Old Covenant presents a rigidity and powerlessness that is completely incomparable to and incompatible with the New Covenant in Jesus Christ.

The New Covenant takes the Law of Moses with its 613 very specific commandments which must be kept in entirety and with great attention to detail and, reaching back to the underlying principle from which the Law was given, puts forward one extremely simple two-fold command for those bound to the New Covenant by the New Birth: Love God with all and love your neighbor as yourself (Matthew 22:37-40).  Christ makes it clear that the entire Old Covenant is dependent upon this two-fold principle.  Abrogating the 613, Christ brings the "letter of the law" of the New Covenant down to a simple two-fold commandment.  Notice that Christ did not carry forward from the Old Covenant any feasts, festivals, Sabbaths, dietary restrictions or the like.  He presented the New Covenant as exactly what it is: a NEW Covenant.

What is presented in Galatians 4:8-11 is a rebuke to the Galatians for their desire to return to the "powerless and bankrupt" system of ignorance they were delivered from when they came to Christ.  Truly, none can look at those who continue in attempting to keep the Law in the system known today as Judaism and say that they know God.  The Apostle John made this abundantly clear, "No one who denies the Son has the Father. Whoever confesses the Son has the Father also" (1 John 2:23).  In denying the Son, the practitioners of Judaism, both past and present, do not know the Father.  Their system then falls into the same "powerless and bankrupt" category as that of the Galatians' former idolatry.  This is why the Apostle Paul said, "if there had been a law given which could have given life, verily righteousness should have been by the law" (Galatians 3:21).  Any system other than the New Covenant and the New Covenant alone is "powerless and bankrupt."

The Old Covenant, it's laws, ceremonies, festivals, feasts, Sabbaths and restrictions are powerless and bankrupt.  Why then would a Christian attempt to hold on to them?  The Covenant of Promise predates the Law being given to Abraham (Galatians 3:18).  The Law was added because of the wickedness of men and was to be in effect until the Mediator came (Galatians 3:19).  But a Mediator has come (Galatians 3:20) and we are no longer in any way, shape or form bound to the observances of the law (Galatians 3:24-25) but heirs of the Covenant of Promise by faith in Jesus Christ (Galatians 3:26-29).  It is in this context that the Apostle Paul begins to build an argument against returning to the "powerless and bankrupt" elements from which the Christian has been redeemed in Galatians 4.  Against such a backdrop, how can we question the Spirit's intent in these passages?
The Old Covenant is powerless.  Trying to keep it accomplishes absolutely nothing in the present day of salvation by faith in Christ.  The Old Covenant is bankrupt.  Trying to keep it adds absolutely nothing of value to the Christian life.  It is powerless and bankrupt; nothing more or less.  Festivals are powerless and bankrupt.  Keeping the Sabbath is powerless and bankrupt.  Maintaining dietary restrictions is powerless and bankrupt.  That which is given in the New Covenant is sufficient.  I do not need to point back at the 10 Commandments in order to teach a Christian not to steal, covet, commit adultery, dishonor their parents or worship a strange God; it can be done with the New Covenant perfectly.  The Old Covenant serves to teach us how the eternal principle was applied by God in that situation, in that particular Covenant.  The New Covenant serves to give us what the Law couldn't: life and righteousness by Jesus Christ (Galatians 3:21-22).
The Old Covenant serves one purpose and one purpose only: "For whatsoever things were written aforetime were written for our learning, that we through patience and comfort of the scriptures might have hope" (Romans 15:4).  This, speaking specifically of the Old Covenant, the Law, is even more clearly expounded in Colossians 2:17: "Therefore let no one judge you by what you eat or drink, or with regard to a festival, a New Moon, or a Sabbath. These are a shadow of the things to come, but the substance is Christ."  Don't try to hold onto the riches in Christ with one hand and the powerless bankruptcy of the Law with the other.  The conflict is too great for any human being to survive.